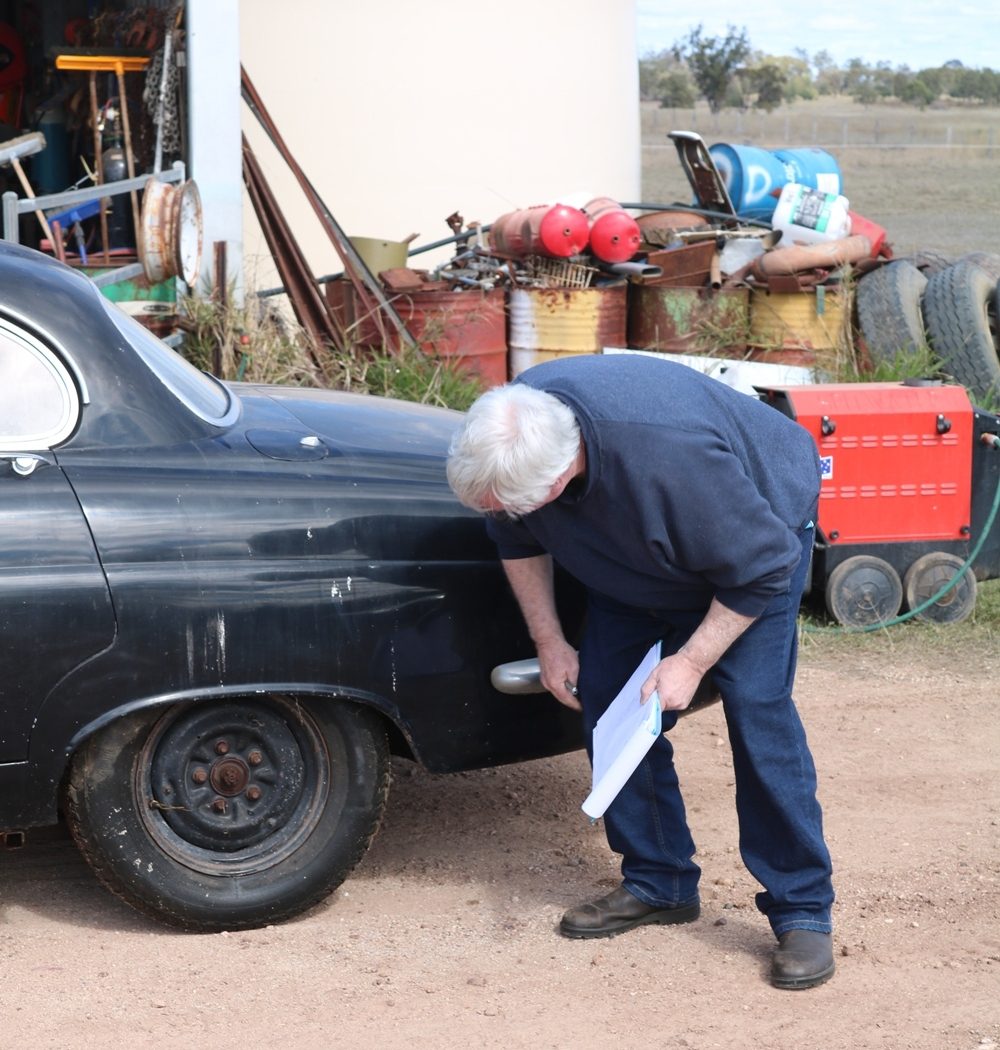 Here we look at how to spot a vehicle that’s been crashed and badly repaired plus issues that arise with chrome, glass, rubber seals and plastics. Also at the information you can obtain from vehicle Build and Identification plates that can save you money.

Modern cars can suffer serious deformation from relatively minor impacts. They’re designed to do that to soften the impact on occupants and are meant to be junked after a serious crash. Some, however, are purchased at salvage auctions, cheaply repaired then sold to unsuspecting buyers.

Registers of written-off vehicles do exist, but if the wreck was purchased in another state, tracking its history becomes difficult. Close inspection initially, followed by a professional check once you decide to buy, is the best defence against choosing something that could be a source of long-term problems.

Water leaking through a boot-lid or rear hatch seal is a common indicator of poor-quality repairs. If the cargo area smells musty, the floor coverings are damp or there’s surface rust beneath them, something is no longer fitting properly.

Gaps between body panels should be reasonably consistent. If there is a massive space between the bonnet and mudguard on one side and virtually nothing on the other, or doors showing similar inconsistencies, the car has probably been in a major accident. Find another one.

Doors that are hard to close or ill-fitting can be a legacy of crash damage, or just old age and a hard life. Either way, rectifying the problem is an expense you don’t need. Ignoring major gaps isn’t an option as not only water and dust can sneak into the passenger area but also dangerous exhaust fumes.

Rubber seals attached to doors or to the main vehicle body  need to be in excellent condition and replaced when they are damaged or worn.  How many times during the life of a car, however, have you had the rubbers replaced?

Most will soldier on until they are flat or rock hard and not doing their intended and quite important job of keeping the vehicle cabin sealed against water and fumes. The condition of the rear hatch seal is especially important because it is the one most likely to let dangerous gases from the exhaust outlet slip past.

The other thing an old, weather-beaten seal can give you is a link to the car’s past. Peel up another section and underneath should be the car’s original paint colour. Is it similar to what’s there now or has there been a quickie colour change at some point?

Mismatched or inconsistently faded paint are big hints that the car has been in a crash or three during its life. These may have been minor bumps that come with the territory when buying an inexpensive set of wheels, but a vehicle that’s been repainted from the windscreen forward or down a complete side has had a major ‘whack’.

With the vehicle in a shaded area, look for areas of mismatched paint. This is relatively easy to see on darker cars or those with metallic paint, less obviously with lighter colours.

General fading or minor paint blemishes are common on lower priced cars, but if a repaint extends from the front or rear panels all the way to the roof, the vehicle has probably had a hefty hit and could be suffering structural damage as well.

Tyres that aren’t wearing consistently are big hint that you’re looking at a dodgy car. Excessive or patchy tread wear, especially to the inside edges are symptoms of serious problems that a wheel alignment won’t cure.

Chromed bumpers have largely disappeared and that’s a good and bad thing depending on your perspective. The old-fashioned steel ones will cop a knock with less damage than modern plastics but rechroming an old-style bar has become horribly expensive.

Damaged or missing body moulds, chrome strips and wheel covers can actually save you money. They don’t affect a vehicle’s drivability but will reduce value, so you can save by picking a tatty car over a pretty one.

Australians have grown used to seeing vehicle Build and Compliance plates attached to various parts of the underbonnet sheet-metal. Some made life easier for roadworthy inspectors and car valuers by putting a VIN strip at the lower edge of the windscreen.

However, some manufacturers in Europe, the USA and parts of Asia mount plates in quite unexpected places. The Handbook for the vehicle will tell you where to look and what should be there.

The things to look for when you do find the identifying plates are the model designation (so you know it at least relates to the correct model) and the build year.

Quite often a vehicle will have been built in one year (say 2008) but not been fitted with a compliance plate until a year or even two later. So it is a 2008 (build) or 2009 (complied and sold) model? Finance companies will always work off the build date when establishing realistic values and so should you.

There are sites on the internet which give value ranges for vehicles the same ages and type as you are buying or you can have the one you are buying individually valued. This will take account of kilometres travelled, any obvious wear or damage, even its colour and the options fitted.