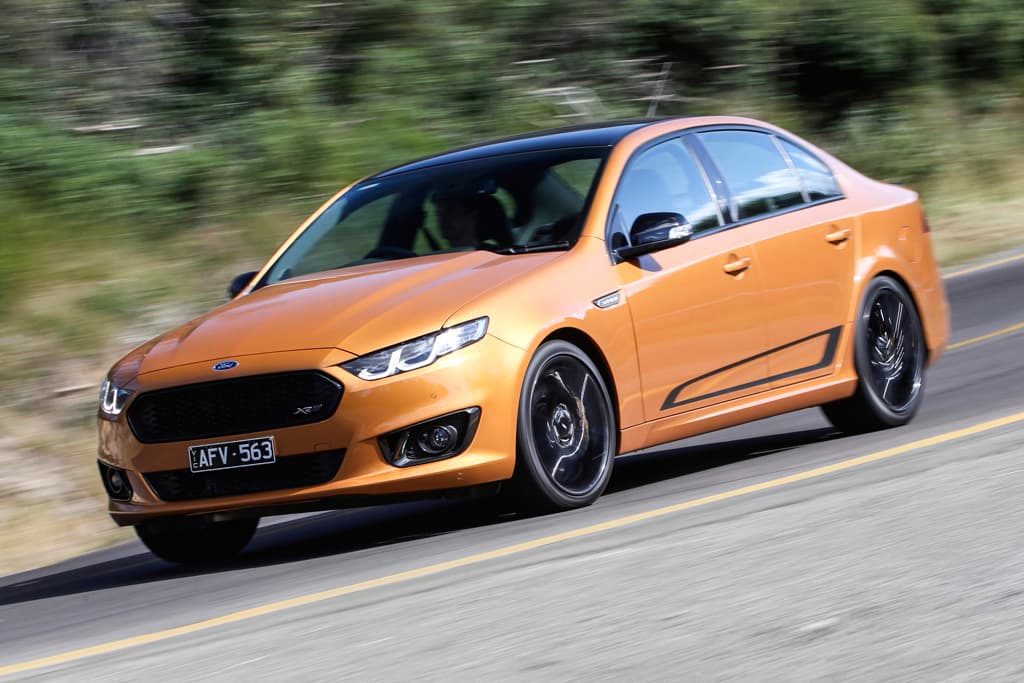 More than two years after the last Holden left local production lines and three years since the final Aussie Ford was made, new examples of both brands are still seeking owners.

In secluded corners of dealer showrooms and private garages across the nation, these cars sit as tangible reminders that Australia not too long ago was home to some of the fastest and most involving four-door sedans on Earth.

None seem to have suffered the ignominy of discounting, in fact quite the reverse. Several we sighted were being marketed at seriously inflated prices; their vendors looking to scarcity, low kilometres and rampant nostalgia to sustain prices while awaiting response from the ‘collector’ market. Coro-19 may have scuppered that plan.

If you yearn for one of the last cars to depart the local Ford factory, a queue of keen vendors has on offer a variety of Falcons and related FPVs for your driving or collecting pleasure.

Lowest of the low-kay Falcons with just TWO miserable klicks recorded is a 2016-build XR6 Sprint X auto being sold privately in Queensland for $71,000. That’s a hefty $16,000 above the original cost but those single-digit kilometres must be worth something. Just don’t let them drive it too far from the transporter when having it delivered or your recorded kilometres might jump by 50%.

Perhaps you prefer something similar but with a grumbling 345kW V8 under the bonnet and manual transmission? If that’s your taste, we also located an XR8 Sprint with 12km on the clock. It’s available in Victoria with an asking price that’s nudging $90,000 – a $30K boost to the Recommended Retail Price (RRP) of $59,990.

Those who prefer models from the Holden side of the fence will find that segment also bulging with opportunities. Online sales sites checked during May 2020 were brimming with never-registered Holdens and HSVs and many were showing minimal kilometres. In common with the Fords though, a GM-H leftover priced at anywhere near its original RRP was going to be a struggle to find.

One we did stumble across was a Commodore VF II Motorsport Edition with five km recorded and priced at $75,000 before on-road charges. That’s about $15K above the money Holden was asking back in 2017 but still a better deal than some others in the market.

If the wallet is genuinely bulging and you want exclusivity, then fly (figuratively) to Western Australia. There in storage and still wearing its delivery stickers sits an ultra-rare HSV GTS R W1. Just 300 were made in 2017 and this is #111. Originally it was priced at a hefty $170,000 however the vendor seems confident that someone is going to pay almost $100,000 more.

Then again you can own a true giant of the Aussie collectible car market without having to stump up anywhere near $260,000 and certainly nothing approaching the $1 million once placed on the head of a Phase 3 GTHO? Available currently via a specialist performance car dealer is the VERY last HSV W427 with seven litres and an asking price of just $200,000.

That might still seem pricey but for the most significant Australian production car of the 21st Century, #137 of the 137 cars ever made (production was shelved early due to the Global Financial crisis) and a documented 339 kilometres since new this HSV looks a bit of a bargain.

Looking overseas, the chances of stumbling across a viable low kilometre (or mileage) car grow stronger. Condition varies of course depending on the level of TLC lavished or denied over the years and some are genuine horrors.

The now fashionable ‘barn find’ might need nothing more than recommissioning and a retrim, however it much more likely to be a concoction of corroded metal and chook droppings ready for the tip. That still won’t stop somebody with an adventurous spirit and vast resources restoring it to new condition though.

The DeLorean DMC-12 is one of the last cars built during the troubled DeLorean’s final production year and is showing a time-warping 1200 kilometres.

There is (as always) a catch and that is the USA location of the car. Price might be a consideration as well with the US$51,990 converting to around A$80,000 even before you start thinking taxes, freight or Customs costs.

So, what are the benefits and pitfalls of owning a brand-new car that will only maintain its value if left in the dark doing pretty much nothing? As we’re not authorised to provide financial guidance, we cannot advise on the investment implications of such strategy. However common sense advice would suggest keeping a close eye on the market for such cars and being prepared to react quickly.

Nostalgia is going to motivate many ‘investment’ purchases and it can quickly wane as the pool of purchaser pool begins to diminish and the survivors lose the resolve to own cars that they aren’t permitted to drive.

DUE CARE AND ATTENTION

If you are committed to hiding your piece of history until better times emerge then there will be issues of storage, security, maintenance and insurance.

A ‘safe’ place to keep the vehicle means safe from theft, fire and other perils. It also means somewhere protected against surface dampness and humidity which can promote rust. The area also needs to be properly sealed to prevent damage caused by birds, animals and vermin. Insurance at reduced cost can be arranged with specialist companies on vehicles than rarely, or never, leave home.

Although a vehicle might not be driven it will still need to be maintained. If it is never going to be started, the coolant but not lubricants can be drained and the vehicle suspended on blocks to stop tyres ‘flat spotting’. Even in the best of environments and with scrupulous care, rubber components are eventually going to deteriorate, as will electronics, the fuel system, hydraulics and air-conditioning.

If you intend buying a ‘new’ vehicle that has been standing for several years, a complete independent mechanical inspection is vital. Warranty cover may have expired or come with limitations so make sure the terms of the sale don’t diminish your protection against faults.