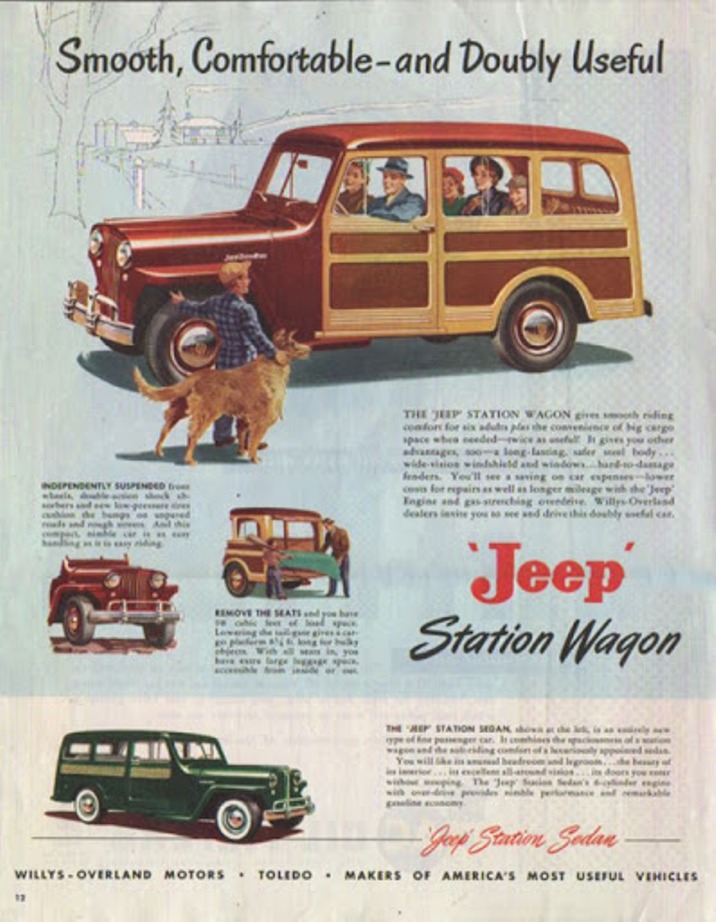 Arguments still rankle about which car company developed the ‘pickup’ or ‘utility’ and likewise there is no fixed opinion as to whose design created the first ‘Sport Utility Vehicle’ or SUV.

The terminology is American to be sure but the finding early examples of vehicles that intended to carry multiple occupants and/or cargo takes us to Europe and in particular the British coach-building industry.

If we accept that SUVs don’t need to be all-wheel drive (and many in the current market are not) then minor British manufacturers such as Armstrong and Jowett move into the fray, plus one of the largest.

‘The ‘shooting brake’ had been built since the 1700s as a carriage for hunting parties. Once motorised transport became popular the name was adopted to describe a timber-bodied vehicle with one or two rows of rear bench seats and space behind them for occupants’ firearms and refreshments.

Across the ‘pond’ and also during the 1920s, US manufacturers led by Ford began producing ‘station sedans’. These as the name suggested were large, timber-panelled vehicles with space for up to 12 passengers used by hotels and country resorts to collect groups of guests from the railway station.

Following World War 2, the lure of the Great Outdoors became irresistible and Jeep’s reputation for combat-toughness was undeniable. The name ‘Overland’ dated back to the 1920s but in 1946 it was applied to a Jeep station wagon with frontal styling that echoed the military version. Jeep insisted that its Overland would be of all-steel construction – no flimsy timber framing here – however, all-wheel drive and the ability to really go off-road didn’t become available until 1949.

During the 1950s, Dodge, Chevrolet and truck maker International all joined the market with passenger vans based on their light truck chassis but sales didn’t match the 30,000+ achieved annually during the 1940s by Willys.

Britain with the Ferguson R5 made an unsuccessful attempt during the 1960s at building a family wagon with full-time 4WD. However, buyers would need to wait years for a model that really inspired modern SUV design.

The Range Rover was a serious and competent off-roader wrapped in elegant aluminium bodywork and with a rumbling V8 providing the power. Inside was enough comfort to attract well-off buyers and once a four-door version became available, Range Rovers posed a significant threat to conventional prestige models.

US manufacturers took some time to respond and when they did it was Jeep that again made the running. Using a big V8 engine and with an emphasis on style and luxury, the Jeep Wagoneer Limited that arrived in 1978 helped keep the brand viable while other sectors of the American Motors stable disappeared.

Luxury mixed with off-road ability eventually found its way into the model ranges of Europe’s most prominent brands. Mercedes-Benz, BMW, Volvo, even Jaguar and Porsche have by now produced ‘all-wheel drive’ products with plenty of space for people and cargo.

In the USA, General Motors and Ford have turned their basic off-road models into leather-trimmed luxo-barges with prestigious names. The badges on the grille might read ‘Cadillac’ and ‘Lincoln’ but under the skin is some very basic Chevrolet Silverado and Ford F-Truck engineering.