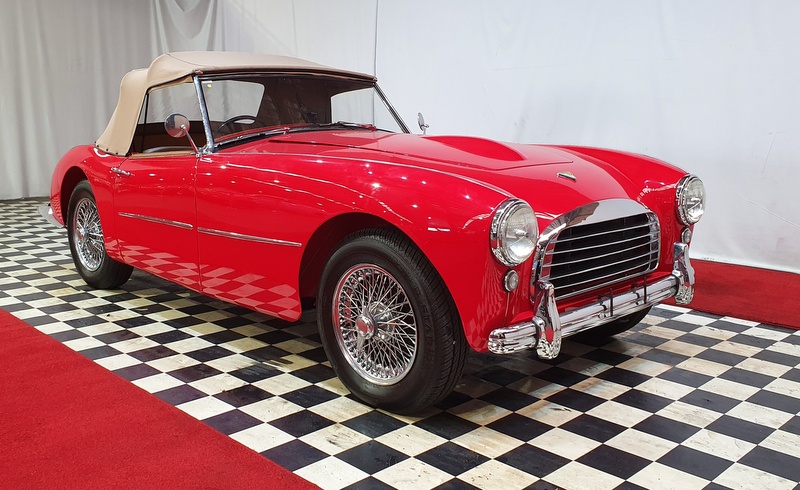 Held just 72 hours before the Financial Year ended and amid the greatest period of financial turbulence in 90 years, Lloyds’ 27 June auction of Classic Cars and Motorcycles was never going to be a drab affair.

Yes there were disappointments as some, mostly recent, offerings didn’t reach expected prices. Countering that were strong results from many of the older cars in the online sales room, including some that must have gone close to setting international records.

Of course, the elephant in that particular room was one slightly singed HT GTS350 Monaro that crashed spectacularly on debut for Harry Firth’s fledgling Holden Dealer Team. It was touted as yet another ‘million dollar Aussie Muscle car’ but very few were surprised when it came up almost $300,000 short of the ambitious target.

All prices except where noted otherwise are at hammer fall and subject to a 7.5 percent Buyer Premium.

The first Lloyds lot was a genuine US Air Force Humvee that dawdled to an unreserved $44,790 (including 7.5% Buyers Premium)  before a pink – of course – 1959 Cadillac 62 Convertible made everyone smile with its resonant $112,500 (plus premium).

If the Mach 1 was too heady then a tribute to the Allan Moffat Boss 302 car in correct ‘Coke’ livery looked a bargain. Seconds from close of bidding the screen price was $116,500 before a period of fierce bidding drove the eventual hammer price to $130,500.

Another surprise from the Muscle Car era was a 1972 Chevrolet SS Nova clone with later LS2 engine and Harrop supercharger. It took several minutes and multiple bids to reach a final price of $81,000.

Interest in the Australian Muscle contingent began early in the day with a mega-rare VJ series Charger E49 that charged (literally) its way from $142,000 to a healthy $175,000.

While everyone waited for the touted ex-HDT HTS350 Monaro to make its appearance there were other Holdens to be sold, beginning with a contingent of 1956-61 models.

These were led out by a lovely FC Special sedan that leapt quickly to its $55,000 close, followed by examples of the FE, FB and EK series. Best of these was an amazing EK Hydramatic that had travelled a documented 9300 miles from new and made a very reasonable $50,000.

A 375 kilometre Maloo GTS realised $88,000 and a VS GTS-R a healthy $142,000 before  The Moment – or moments – arrived. Although the HT GTS350 had been trumpeted across every media outlet in the land as the sale’s star turn, its on-screen bid as hammer time approached of $535,000 put it a bare $30K ahead of the pioneer-build Torana A9X sedan of which minimal fuss had been made.

With 20 seconds to go, the HT hit $560,000 then moved in $5000 increments towards its final resting place of $715,000. Given that this was a reserved auction and the expected result some $300,000 higher we will need to wait for confirmation of the sale being finalised.

The Torana’s provenance included build sheets and a sequence number predating all other known A9Xs, lists of previous owners and a folder of cuttings from its days as a press test car.

None of that seemed to entice last minute bidders though and the price hardly moved before the car was shown as ‘Closed’ with $515,000 beside its name. Confirmation will be awaited on this one as well.

Later in the sale came remnants from the shut down and dismembered Gosford Classic Car Museum, beginning with some products of the old Communist Bloc.

Several Skodas went cheaply but then came a big, black 1970s Tatra with rear-mounted V8 engine and scary handling. It made $32,200, only to be spiflicated by a 1950s flat-four version that rocketed to a hammer price of $53,000.

If you wanted something that resembled a 1950s Packard but spoke with a Russian accent then the big Gaz Chaika limo with 5.5 litres stopped Lloyds’ bid counter at $53,000.

For those in the market for something British or European then examples of all the major brands were on hand. However the one generating huge interest and bidding to match was an obscure Swallow Doretti sports car. These were based around Triumph mechanicals and only 276 were built from 1954-55. It made an impressive $91,000.

European prestige brands are in some trouble with Covid-19 and the only bright point for Porsche lovers was the spirited bidding that carried a beautiful black 911SC all the way to $119,000. A 930 Turbo convertible made just $1000 more that the SC while a repainted, LHD-spec 356 Roadster grudgingly reached $202,000.

Better value seemed to be with a very rare 1938 Lancia Astura convertible; factory RHD in a hideous shade of green that ran out of interest at $110,000.  Painted in a similar shade but apparently worth more than twice the Lancia’s money was a 4.25-litre Drophead Bentley that went for $260,000.

Saving the best until last (maybe), the car-based section of the sale closed with a clatter of 1970s-80s Ferraris and a couple of more recent Lamborghinis.

Showing the difference that scarcity can make, a 1972 Ferrari 365GTC that was one of 505 built in LHD reached $210,000. That value was almost immediately obliterated by another GTC/4, factory built in right-hand drive and one of just 40 such cars which registered a high bid of $390,000.

The Lamborghini Diablo GTR was a far more enticing buy than its companion 2008 model Gallardo; that car eventually making $127,000. The GTR is one of only 30 made in 2000 for European Supertrophy and good for 338km/h. It was certainly the late-comers’ sale-stopper with a rush of bids taking it within minutes from $310,000 to an eventual price of $525,000.